No better day to start my new weekly language post, which I’m calling “Word Wednesday” (and which is really just going to be a place for me and other like-minded folks (students, teachers, writers, everyone and anyone basically) to riff about words and sentences with currency in the arts, culture, and politics) than on the day that that great poet Yogi Berra passed away. Not only did I grow up with him as the namesake of my favorite cartoon character, but I used his last name for the ghoulish protagonist in my first short story, written in 3rd grade for Mrs. Roach, called “Gravedigger Blues.” (His name was “Paul Berra.” Clever, right?)

To kick off ‪#‎wordwednesday‬, I’m going to share my favorite Yogi-Berra-ism that Yogi Berra never ism-ed. Rather, it was said by an old Italian guy whom I worked with one summer when I was roofing my way through school and toward melanoma-ed shoulders who once said the following to me when I came back from doing the lunch run with the wrong sandwich: “Hey, kid, that just goes to show: You can lead a gift horse to water, but you can’t look in its mouth.” I think Mr. Berra would have approved. If there’s a heaven for those guys, I hope they’re being introduced to each other as I type these words.

If anyone has any other Yogi-Berra-isms to share for #wordwednesday, whether uttered by Mr. Berra or not, please share the word wealth.

Enroll in my grammar course at The New School in NYC, called Tools, Not Rules.

One of my most dedicated grammar students presented me, on the last day of class, with the finest accessory any grammar teacher could hope for. I’ll wear it with pride. Thanks to her and to all my dear grammarians for a wonderful semester. 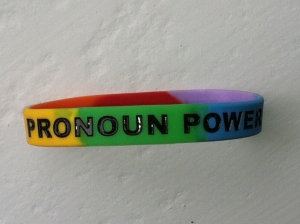 Not sure how to explain what happened last week at the NCTE/CCCC panel I chaired on “Progressive Approaches to Grammar, Punctuation, and Usage.” Not only was it a well-attended, lively session, but a superstar, nay, a ROCK star in the field of writing pedagogy attended and participated in my workshop. He was sitting in the back of the room. I had seen him come in and quietly take a seat (and fairly freaked out), but no one else knew he was there until I had them introduce themselves. And he said, “My name is Peter Elbow and I’ve been teaching writing for over 30 years, have written a few books on the subject; and I am quite interested in progressive approaches to grammar.” The entire room turned around, and I kid you not, audible gasps and whispers and even some exclamations erupted. An awesome Writing Center Administrator, a young professor named Tom, stood up and said, “No way!” But by the end of the workshop, Elbow had become just one of the group, albeit a very wise and experienced and generous member, but a member nonetheless. Some folks asked if they could take an “Oscar selfie” with him. He graciously agreed. One of those students sent me this photo. I can’t adequately describe what an experience it was to share my insights about language and writing with a group that included Peter Elbow. One of the true highlights of my teaching career. 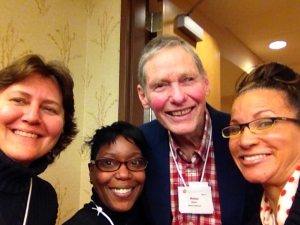 After reading BLAKE BUTLER‘s excellent piece in Vice Magazine on L. Ron Hubbard’s sentences, I started to think about how we talk about sentences.

If you are a writer who cares about sentences or a writing teacher who wants to help increase your students’ language awareness, join me in St Louis, MO, at the NCTE/CCCC conference this week, where I’ll be chairing a panel on this topic on Friday at 6:30 PM: “Progressive Approaches to Grammar, Punctuation, and Usage” (FSIG.8)